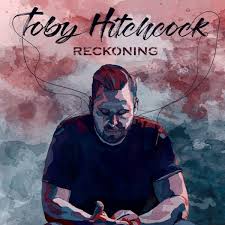 Toby Hitchcock – Reckoning
Toby Hitchcock, he of Pride of Lions fame and the proud owner of a 2011 solo album “Mercury’s Down” is a singer. When I say a singer it’s like saying Leonardo Da Vinci was just a painter, Mr Hitchcock has a voice that stops you in your tracks.
Reckoning is an AOR/melodic rock gem, the music is power ballad, keyboard supported, energetic, thoughtful and a showcase for one of the best vocalists I’ve heard in many a year.
Due to work commitments, New Year celebrations that were a bit more full on than planned I only had a chance to listen to snatches of the album until last week when it became my choice of listening at work and I’ve played it multiple times since.
The album kicks off with “No surrender” – No this isn’t a song sung by Rangers fans on the terraces of Ibrox Stadium* but instead a high tempo melodic rock starter with a real Scandinavian feel plus the added benefit of a strong vocal. And yes the vocals are stronger than a Icelandic competitor in The World’s Strongest Man.
*For non sports fans the song at Ibrox is goes along the lines of “The cry was No Surrender, surrender or you’ll die”.
“Promise me” has that classic AOR feel and sound that brings up memories of Survivor and such like. The catchy keyboard synth and a bouncy chorus that TH leads the verses into effortlessly. Again it’s fast, melodic and has the statutory layered backing vocals.
“Show me how to live” – a mournful, emotional slow ballad that demonstrates what a simply stunningly powerful vocalist TH is. OK this is the ultra-soft end of the spectrum and the song is one that would be a superb X-Factor final song to test the vocals of the finalists.
It has a keyboard intro and feel so soft that Smooth radio might make it their record of the week. However this is master class on how to hit and hold a note and demonstrate a magnificent vocal range throughout a ballad. Stunning.
“Behind the lines” – Magnum-esque keyboards with accompanying pomp and restores the high tempo but with an angst ridden story line of break up.
“Fighting for my life” – some classic AOR immediately from the keyboards, a swirling guitar sound and layered backing vocals. A song of being alone and trying to move on and then the power of TH’s vocals and upbeat chorus lift this track
Serenity – one of the catchiest choruses of the record and the pre-release of the album and it’s obvious why. “I’m gonna take my chance and live my dreams, cos it can change in a heartbeat”. Wise words Toby and a superb piece of AOR magnificence.
Queen Untouchable gets a bit rockier but in keeping with the whole vibe of the album. By now there is definitely a distinctive Toby Hitchcock feel to the whole album.
For me the track that stands out is the rocky but emotive “This is our world”. The strength of the vocal (did I mention before that Mr Hitchcock has one hell of a set of pipes?) lifts this song above many contemporaries.
Someone like you – the vocals are very Dio-like for the verses, think Rock and Roll Children with a more melodic, softer yet strong chorus. The guitar solo is a belter and this one superb way to end the album. The last few moments of Toby holding notes like they are million pound notes sums up the whole album ending it on a high.
I had no idea what Reckoning would be like, I feared a bland melodic rock by numbers effort, I was way off the mark. This is an AOR fan’s dream.
OK so hard rock fans might not like it as much as I do but life is all about diversity and differences.
The band are tight, the keyboards underpinning the whole sound, and professional throughout.
One thing that can’t be denied is the fact that Toby Hitchcock can sing as well if not better than many so called established stars. He could sing in any manufactured super group in a heartbeat.
One not to be missed playing live.
Overall album – 7.5
The Toby Hitchcock vocals – 9.5
Review by Lawrie Willcox
Tracklisting:
1. No Surrender
2. Promise Me
3. Show Me How To Live
4. Behind The Lies
5. Fighting For My Life
6. Serenity
7. Queen Untouchable
8. Gift Of Flight
9. Don’t Leave
10. This Is Our World
11. Someone Like You
Lineup:
Toby Hitchcock: Vocals
Daniel Flores: All Keyboards and Drums
Michael Palace: Guitars and Bass
Yngve “Vinnie” Strömberg: Drums and Percussion