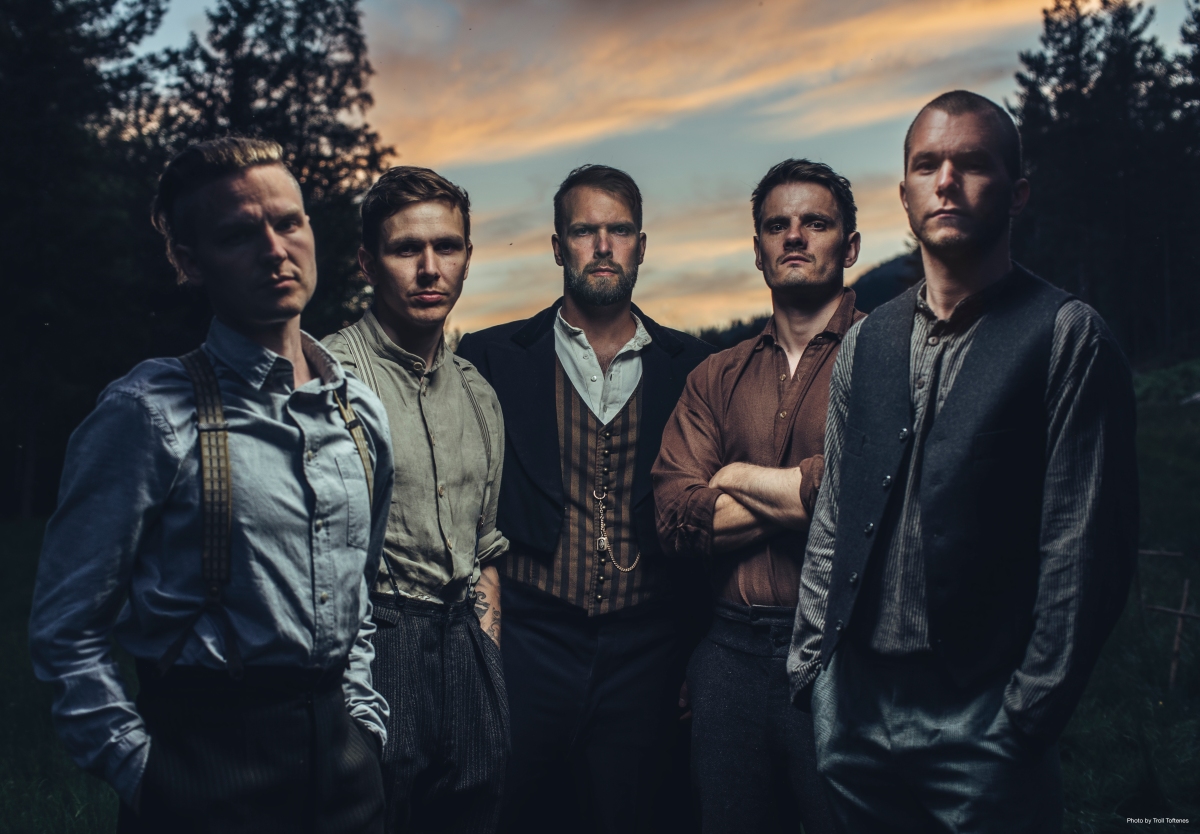 If Leprous was a party, I arrived that late, I got there after the parents arrived home to find their house trashed. I had never heard of them until I was sent their last album (Pitfalls) to review. But what was to be an inspired decision by me (and Leprous) was an album that was totally different to most of what Ive been listening to for the last 40+ years and it just blew me away. Few bands and albums have done this since I started reviewing back in 2007. I went out and bought the back catalogue, few bands make me do this. They were more metal over the albums predating Pitfalls, but like Opeth a chance has occurred, and for me it is an inspired change.

In fact they are a band I never thought possible that I would ever listen to, a fact that my wife pointed to one day asking me why I was listening to ‘this’ ( a song from Pitfalls that randomly popped up in the car). I said that it was just ‘wonderful’, I couldn’t explain fully, I just muttered ‘its wonderful’ and we left it at that.

So here we are mid/pre/post (delete as appropriate) Covid 19 and we have the follow up to Pitfall, Aphelion. Aphelion is the point in the Earths orbits that is farthest from the Sun, which in 2021 was Monday 5th July. Enough fact learning people, let’s get into the detail.

The first three singles have been Castaway Angels, a 6 minute effort that glides by and sees Leprous throw the kitchen sink at it. If Leprous could get a tune out of a kitchen sink, I’m sure they would use it as a viable instrument! Baard Kolstad’s drumming is sublime and Einar Solberg’s vocals are simply to die for. It’s a piece that just flies by and you can only reply appreciate the band for what they are by watching the video and absorbing yourself in the song. Running low is the other single and is quite dramatic, one minute groggy, then the chorus of ‘Its a miracle, miracle, miracle…’ being an ear worm of the highest order, but also very, pop and also cinematic. In face their songs would certainly elevate any pice of cinema that they could become attached to. The third single ‘The Silent Revelation’ is a huge piece and encompasses Leprous. Its the best song on the album and I would direct any future Leprous virgin to dive in with this track. Its heavy, nuanced and Solberg’s falsetto take it up a level,  finishing with a choral falsetto!

‘Out Of Here’ is more subdued but is no less enthralling thanks to Solbergs vocals, until we get to the mid section where the bridge ramps up the heaviness. ‘Silhouette’ has a strong synth opening before introducing strings to complement the synths. ‘All The Moments’ kicks off with Kolstads drumming at the forefront. It’s (almost) a slow burn, but when it steps up to the plate is does so in dramatic fashion. ‘Have You Ever?’ is one of the softer songs, but still packs a punch one you dive in to the quality musicianship.  ‘The Shadow Side’ is about coming to terms with yourself and being yourself. It is dramatic and ends with s searing guitar solo. ‘On Hold’ is an almost 8 minute epic where it is essentially ‘The Einar Show’. Insecurities, doubt, and identity are at the heart of this and its felt through Solberg’s delivery. ‘Nighttime Disguise’ is the last song and arrives quickly. Its the heaviest song by far. Its as close to convention rock as these guys get, with date I say it, crooning before the obligatory falsetto. I cracking end to a cracking album. The vinyl and Mediabook CD contain two extra tracks, a live version of ‘Acquired taste’ and ‘A Prophecy To Trust’

Gill is right. its a band I would never have entertained before at any point in my music listening life, but I think I jumped in at the correct time with Pitfalls, because Aphelion has taken this band up another lever which I didn’t think was possible.

Its hard for me to label Leprous, which is good because I hate labels! It is a sound that is ephereal, expanding, almost heavenly, and is neither rock, nor prog, or anything else. Its just simply…..Leprous.

The best way I can describe Aphelion, it feels like a best of album, and that in itself is remarkable. Its music that is delicate, balanced, sways from pop to rock, sometimes in the same sentence and just sweeps the listener away and is one of the finest albums of 2021

I can’t judge the band based on their EP or debut, but as a standalone sophomore album, where bands can struggle to recreate their first born album, its bloody good.

If you don’t know them already, As December Falls are a band with big ambition. They have suffered some hardship in the past with their music demos being stolen in 2018, then when stardom is on the horizon, Covid comes along and squarely kicks every band in the world in the balls, ADF included.

ADF are a not a band to let such trivial matters get to them. They achieved self sufficiency early on when being told they were ‘too this’ or ‘too that’. Their ‘fall down and dust themselves off ‘attitude resulted in them selling out 90% on their most recent tour of the UK, and their upcoming tour in support of Happier is also close to total sell out. On FB they are offering their EP for free and its signed for good measure. This is where they came to my attention, and I’m bloody glad they did.

Taking matters in their own hands they secured a loan to fund ‘Happier’, all of which has been paid off due to an overwhelming amount of pre-orders from their dedicated fanbase. If they decided to offer shares in the band I think I would invest even before hearing the music based on their amazing story to date.

First of all ADFs influences stretch far and wide, from more ‘classic rock’ as Hendrix and Slash, to the more pop-punk stylings on Blink 182, Sum 41 and Fall Out Boy. I would even throw in a bit of Coheed and Cambria for good measure.

If you’re a fan already, ADF have already released 4 singles from the 11 track album, and based on the quality of these alone, I can see why they paid off their loan in double quick time. ‘Afterglow’ immediately draws comparisons to Paramore and Fall Out Boy. If Stump and Williams got it on then ‘Afterglow’ and Bethany Hunter would be the result. ‘Nothing On You’ is another example if simple riffs combined with a powerful chorus (with added ‘whoa-ohs that would keep Claudia Sanchez in approval) that immediately hits home and is as infectious as the Delta variant. This reference could look shite in another 10 years! ‘Tears’ is an uplifting song that would make the more hardened critic want to join along with. ‘I Don’t Feel Like Feeling Great’ is a belting song. Its easy to underestimate bands that go for a pop rock punch, but there’s some cracking guitar work that’s up there with any classic rock guitarist, and pulsating drumming thats playing out, making ADF rise above the crop.

Out of the rest of the album the other stand outs are the very anthemic ‘Happily Never After’, and title track ‘Happier’. With ‘Happier’, it’s the first time they take their foot off the gas, and its a very pleasant change. The mood is very different and shows a different side to their talent. ‘Fake Company’ also takes the listener on a different journey. ‘All Of This Is Over’ is another sterling, uplifting track.

There’s always a tendency for music of this nature to be a bit formulaic, but ADF have enough going on here that makes then different from the chasing pack. With the advent of songs like ‘Happier’ and ‘Fake Company’, ADF do enough to show me that they are more than a ‘too this’ or ‘too that’ of a band. ADF produce power pop that deserves to be heard by the masses. In doing ‘Happier’ without the help of a label is remarkable. I hope someone in considerable power looks at the ticket sales, ambition and the quality of this album and snaps them up immediately.

I can’t judge the band based on their EP or debut, but as a standalone sophomore album, where bands can struggle to recreate their first born album, its bloody good.

As a young at heart 54 year old I can totally see why ADF are selfing out venues and have a very dedicated fan base. They are only going one way from here, and that’s up! I would love to see the guys on their tour but I think I’d be the oldest bloke in the room by about 30 years.