Mark Tremonti is the guitarist of modern legend. In the UK he is the ‘Riffmaster General’, in Germany, ‘The Riff-meister,’, and in Latin he is ‘Riffus Dominus.’ I’m not making this shit up. Anyway, I digress….
Tremonti began writing in his Orlando studio in early 2014. Joined by his band, Tremonti penned more than twenty-five songs over the course of multiple sessions. “We wanted to do a ton of songs,” he affirms. “I decided to take my entire catalog of material, get everything out, and purge it. On ‘All I Was’, we couldn’t spend as much time on pre-production. This time, we were able to take the time to tear the songs apart and put them back together so they could become as dynamic as possible. That helped make the new music what it is.” 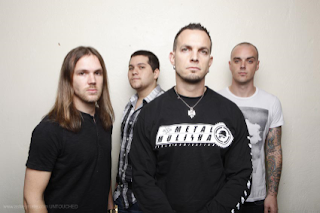 Emerging from the most prolific period of his two-decade career, Tremonti is actually delivering two successive albums – ’Cauterize’ and follow-up companion album ‘Dust’. With ‘Cauterize’ leading the charge in June 2015 and ‘Dust’ to follow in the not-too-distant future, it’s a one-two punch of modern thrash and melody that has become the group’s signature. Think riffage of gargantuan proportions. Tremonti allows, er, Tremonti to play all the mental stuff he has NEVER done with Creed, and only scratched the surface with in Alter Bridge. Take, for example, opening track ‘Radical Change’, it’s an absolute onslaught of bass, guitar and drums, that will leave you gasping for breath. It’s a song about feeling the weight of the world on your shoulders, something a lot of us can bear testament to. ‘Flying Monkeys’ I’m hoping is influenced by one of my childhood fave movies, The Wizard Of Oz, and it has this low down chugging drawl of a start, dirty and yet with a catchy refrain. Cauterize is a is the burning of part of a body to remove or close off a part of it in a process called cautery, which destroys some tissue (in this case its definitely my ears) in an attempt to mitigate bleeding and damage, so at least the good Doctor knows what he is doing to our bodies in listening to this.
After the collective battering so far, and up to ‘Arm Yourself’ you’re almost praying for mercy. Either that, or a nice ballad! ‘Dark Trip’ is about as light as it gets on the Tremonti scale of balladry. Journey it definitely aint, but it’s a break in proceedings all the same. ‘Another Heart’ is as close as we get to Alter Bridge, more melodic than the rest on offer, such is the case I half expect Kennedy to wade in with the vocals. ‘Sympathy’ if it were on the telly (when MYV used to shoe music videos) a few years back, would be abso-fucking–lutely HUGE. It’s an anthem of stadium size proportions and is my favourite track by far.
Tremonti has a knack for coming up with blistering riffs. Not only that, on from All I Was, his vocals have gone up a notch also. If he doesn’t watch it, sometime soon, he may have to decide if he can keep both Alter Bridge and Tremonti on an even keel, as Tremonti has all the right elements to take them higher, much higher.
I fall into 3 canmps with Mark Tremonti. I couldn’t really abide Creed. I adore Alter Bridge with a passion, and Tremonti (the band) is growing on me with every listen. I liked ‘All I Was’, but with ‘Cauterize’, they have taken it up a notch or three in quality, I think that’s purely down to that fact that they have taken more time with this opus
‘Brutal riffs with a melodic lilt’. That’s how I best describe ‘Cauterize’. Fans of the man, and band will be lapping this up like a metal lovin’ kitten in catnip scented pyjamas. Essential metal listening for 2015
Score 90/100
Tremonti are
Mark Tremonti – Vocals, Guitars
Eric Friedman – Guitar
Garrett Whitlock – Drums
Wolfgang VH – Bass
Michael ‘Elvis’ Baskette – Producer (and fifth member od Tremonti!)
Tracklisting
Radical Change
Flying Monkeys
Cauterize
Arm Yourself
Dark Trip
Another Heart
Fall Again
Tie The Noose
Sympathy
Providence

Jesus! How time flies. Its six years this year since I caught Thunder on their Status Quo-esque Farewell (Ha!) Tour in Manchester. That night was blistering, and I thought at the time, why do they wanna pack it all in when they are still one of the finest in the business. Lets face it, its not as if they needed to shift more tickets, as Thunder’s cult fan base is legendary. So six years after Bang! comes Wonder Years, I mean ‘Wonder Days’.
Thunder are one of the few that rode the coat tails of late 80s rock and stuck two fingers up to Grunge and plowed on thru the flannel shirt era where 90% of other bands fell by the wayside and shriveled away to a corner to die. Only a few have stuck their heads back above the parapet to see if its safe and have contributed something worthwhile.
Of course, and thankfully, their farewell was short-lived. Excellent tours with Whitesnake and Leppard followed, and it was like they had never been away. If you compare the gap in album releases of ‘Bang!’ to ‘Wonder Days’, to the likes of Rush, and Toto then they never really did leave us!
Anywho, ‘Wonder Days’ sees Thunder return as an absolute tour de force. Just the first few bars of ‘Wonder Days’ makes you prick up your ears as you know you’re in for something special. Zeppelin-esque in nature, its 100% pure Thunder once Bowes’ vox kick in and complement the huge Morley riff. Just beware of a litigation coming their way from the lads of Gotthard sometime this week! ‘The Thing I Want’ should be preceded by (hit single) as this ones a whopper that its a cast iron certainty for radio. ‘The Rain’ is a mandolin driven number that has classic Bad Co. running right through the centre of it. ‘Black Water’, stomps along at typical Thunder pace. Their sound and style comes from many other influences but when the backbone is Bowes and Morley, its unmistakable 100% Thunder. ‘The Prophet’ has its roots firmly planted in the 1980 with its galloping riff and Maiden lilt. The song that will ring true to anyone over the age of 40 is ‘When The Music Played’. Bowes sings about the good old days of radio & vinyl, “I held my vinyl like a new born child, memorizing every word, every cover was a window into a far off special world” and then opens up to an overblown level on a grand scale. Thunder usually have a part song or three in their locker, and ‘I love The Weekend’ is such a number. Old fashioned Rock n Roll is something they can do in their sleep, and then some.
To be honest, ‘Wonder Days’ is fucking marvelous and is right up there with Backstreet Symphony. After a few more listens, it could prove to be even better! If you’ve have a preconceived idea about  not liking Thunder, then your life is missing something. For those that love ‘em, or are prepared to give this a good ‘ol listen, then its one of the best albums of 2015, and beyond.
Score 95/100
Tracklisting
Wonder Days
The Thing I Want
The Rain
Black Water
The Prophet
Resurrection Day
Chasing Shadows
Broken
When The Music Played
Serpentine
I Love The Weekend
www.thunderonline.com
www.ear-music.net
www.youtube.com/earMUSICofficial
www.facebook.com/earMUSICofficial
www.twitter.com/earMUSICedel