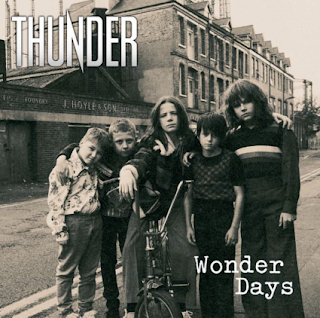 Jesus! How time flies. Its six years this year since I caught Thunder on their Status Quo-esque Farewell (Ha!) Tour in Manchester. That night was blistering, and I thought at the time, why do they wanna pack it all in when they are still one of the finest in the business. Lets face it, its not as if they needed to shift more tickets, as Thunder’s cult fan base is legendary. So six years after Bang! comes Wonder Years, I mean ‘Wonder Days’.
Thunder are one of the few that rode the coat tails of late 80s rock and stuck two fingers up to Grunge and plowed on thru the flannel shirt era where 90% of other bands fell by the wayside and shriveled away to a corner to die. Only a few have stuck their heads back above the parapet to see if its safe and have contributed something worthwhile.
Of course, and thankfully, their farewell was short-lived. Excellent tours with Whitesnake and Leppard followed, and it was like they had never been away. If you compare the gap in album releases of ‘Bang!’ to ‘Wonder Days’, to the likes of Rush, and Toto then they never really did leave us!
Anywho, ‘Wonder Days’ sees Thunder return as an absolute tour de force. Just the first few bars of ‘Wonder Days’ makes you prick up your ears as you know you’re in for something special. Zeppelin-esque in nature, its 100% pure Thunder once Bowes’ vox kick in and complement the huge Morley riff. Just beware of a litigation coming their way from the lads of Gotthard sometime this week! ‘The Thing I Want’ should be preceded by (hit single) as this ones a whopper that its a cast iron certainty for radio. ‘The Rain’ is a mandolin driven number that has classic Bad Co. running right through the centre of it. ‘Black Water’, stomps along at typical Thunder pace. Their sound and style comes from many other influences but when the backbone is Bowes and Morley, its unmistakable 100% Thunder. ‘The Prophet’ has its roots firmly planted in the 1980 with its galloping riff and Maiden lilt. The song that will ring true to anyone over the age of 40 is ‘When The Music Played’. Bowes sings about the good old days of radio & vinyl, “I held my vinyl like a new born child, memorizing every word, every cover was a window into a far off special world” and then opens up to an overblown level on a grand scale. Thunder usually have a part song or three in their locker, and ‘I love The Weekend’ is such a number. Old fashioned Rock n Roll is something they can do in their sleep, and then some.
To be honest, ‘Wonder Days’ is fucking marvelous and is right up there with Backstreet Symphony. After a few more listens, it could prove to be even better! If you’ve have a preconceived idea about  not liking Thunder, then your life is missing something. For those that love ‘em, or are prepared to give this a good ‘ol listen, then its one of the best albums of 2015, and beyond.
Score 95/100
Tracklisting
Wonder Days
The Thing I Want
The Rain
Black Water
The Prophet
Resurrection Day
Chasing Shadows
Broken
When The Music Played
Serpentine
I Love The Weekend
www.thunderonline.com
www.ear-music.net
www.youtube.com/earMUSICofficial
www.facebook.com/earMUSICofficial
www.twitter.com/earMUSICedel