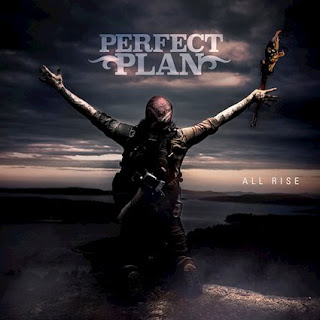 Perfect Plan – All Rise
There are a few certainties in life – the obvious ones like death, taxes, nurses and Sunderland AFC to let you down. Then there’s the others such as Sweden produces probably the best melodic rock bands in the world.
Please don’t scream out “Nurses? You misogynist sexist git #metoo” because it was a nurse that told me that. I forget his name.
Anyway bands such as Europe, H.E.A.T, Eclipse are prime examples of classic Swedish Melodic Rock and there are times when I think I might have some Swedish blood in me because I am a massive fan despite the irony of many having such a US soft rock style.
When I received the latest release from Sweden by a band from Örnsköldsvik called Perfect Plan I was at a loss. Apparently Örnsköldsvik is halfway up the coast from Stockholm (I’d been there once) and on the coast across from Finland. Perfect Plan? Never heard of them.
The blurb I got with the album told me the band had been going since 2014 but this was their first album. The picture of the band gave no real clues but if this was going to be a death metal album I wouldn’t have been shocked, how bloody wrong was I.
First impressions and all that went out the window as ‘Bad City Woman’ blasts off with a piece of awesome melodic rock, the guitar riff sets the tone and then the vocal of Kent Hilli comes blasting in. His voice is sublime, it has range, depth and power. The song is a triumph, it has a superb hook of a chorus and the voice of Hilli is outstanding. It was so good I replayed it again immediately to double check it was that good. Trust me it is.
My fear that they had played their ace too soon was dispelled as the keyboards of Leif Ehlin kicked off ‘In and Out of Love’. A slower but layered song with real depth to the music that builds to a superb sing-a-long chorus. As with ‘Bad City Woman’ the guitar solo of Rolf Nordström compliments the songs showing his undoubted skill but not taking over the feel of the song.
‘Stone Cold Lover’ maintains the feel of the album with the backing vocals supporting the outstanding Hilli voice. Another superb melodic rock song, decent stuff indeed.
By now I was captured and mesmerised. The keyboards and kinda bluesy feel to Gone too Far reminded me of something the new Whitesnake only sniffed at. This was cemented by ‘What Goes Around’ with a chorus of “She’s breaking me, taking me, bringing me down, what goes around comes around” snapped out in time to fit the music perfectly.
‘Too Late’ opens with a Europe-esque keyboard intro. It’s then I realised how the keyboards had underpinned the songs in an unobtrusive way but without them the tracks wouldn’t be as multi-dimensional as they are. Also top marks for using the correct version of “Too” as opposed to “to” or “two”. Grammatically and musically excellent.
‘Can’t Turn Back’ is a wonderfully upbeat song with typical melodic rock style. “We Can’t Turn back to love that’s gone” should surely be miserable but oh no, this is a bouncing tune that back in the 80s would have had me screaming it out with real life experience passion. The guitar sounds, vibe and feel actually make it a song of hope for the future (or maybe that’s just my warped memories!).
‘Never Surrender’ is not a cover of the song by Saxon with the same name. Don’t get me wrong the Saxon song is raw and from the heart, this song is a modern more polished tune from the heart but definitely not British Heavy Metal. It has a driving rock sound but Saxon doing wonderful backing vocals and a keyboard? Not that I remember.
‘1985’ sums up All Rise as an album and its massive nod to how albums by AOR bands in 1985 sounded. It has the overtly US rock style lyrics but with a superb modern sound. The Hilli voice and range is immense, where the f*ck has he been all this time?
‘What Can I Do’ is another superbly crafted piece of the 80s sound and again I just feel a Whitesnake influence, the chorus and backing vocals, key change and keyboard solo just simply make me smile and take me back to a more innocent (and personally a more stupid) time of my life.
‘Heaven In Your Eyes’ ends 11 tracks of wonderful nostalgia mixed with a modern sound, yet another melodic bounce along “if you have a pulse” track.
Perfect Plan are not quite a breath of fresh air but they are certainly refreshing. Judging by their picture they aren’t a bunch of kids, instead I get the feeling these are a bunch of well accomplished musicians who have taken their time to release an album of pure melodic quality. The 3 years from formation to All Rise has been well worth waiting for.
Oh maybe the song titles and lyrics may be slightly clichéd but I tell you what, a cliché doesn’t mean a lack of quality and it definitely isn’t second rate or wrong. This is a release that I know many of my AOR friends will wet their pants over (no pun intended) because it is that good.
To those going to Frontiers in Milan, don’t you dare miss these, they are proper quality and you won’t be disappointed. If Kent Hilli is as awesome as he is on this album you’re in for a treat.

Given that it’s Easter I think a solid 8.5 that will “All Rise” to a 9 on Easter Sunday is appropriate. See what I did there, badly?
Score – 8.5/10
Review by – Lawrie Willcox
Tracklisting
Bad City Woman
In And Out Of Love
Stone Cold Lover
Gone Too Far
What Goes Around
Too Late
Can’t Turn Back
Never Surrender
1985
What Can I Do
Heaven In Your Eyes