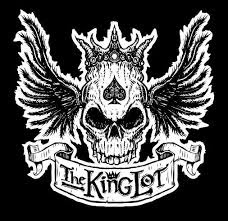 Back in October I excitedly went to see Dan Reed Network for the first time in my history. Id always been a fan, but never caught them in the days when Mr Reed was a bona fide rock god! That aside, up until October Id never heard the words ‘The King Lot’. A support band for Dan Reed Network opened up and to be honest, until I walked out of the gig at the end, THAT was the first time Id heard the words ‘The King Lot’.
They were a band that looked bugger all like they sounded, more biker grunge than a melodic rock band to make your years prick up and attract your attention. If a band I’ve not encountered makes you stop talking and pay full attention then that’s a great thing. The King Lot, I’m glad to say, do this by the bucket load. I watched (and listened) intently, absorbing all I could take in. The CD had to be sought and bought and felt that it deserves a review 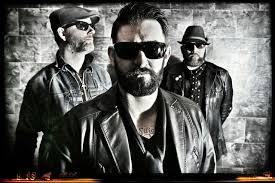 The King Lot was only formed in 2013. I guess they have all been around the block a bit, but the current collective seem planted firmly on the right track. Being Scottish there will always be a comparison to the likes of Gun, and rightly so. But also in the mix are bands like The Cult, The Wildhearts, Thunder, FM, Little Angels and even Diving For Pearls.
The album is fairly short by today’s standards at just under 40 mins. That makes it even better, as the dross is binned in favour of 10 quality rock songs that fly by at an astounding speed.
‘As They Burn’ kicks off like a train to the temple, full of GnR style riffs and sounds much bigger than a 3 piece. ‘One Of These Days’ melds The Cult with Diving For Pearls and is a cracking melodic rock anthem. ‘Addicted’ builds to a storming chorus full of power and energy, and is now setting the stall out for the rest of the album.
Lets Get Together immediately draws on Little Angels as an influence, to a point where it sounds like Toby Jepson is actually singing.  My fave of the album is the haunting (sic) ‘Ghost Of You’ with its guitar refrain that immediately gets embedded into your brain. It’s the kind of song they could turn into an epic length and become a staple for years to come.

‘Lets Get Together’ again had a Little Angels thread running through the track, and is a pulsating and barnstorming track. At this point the album is proving to be consistently strong with not a shite song in sight, with ‘Until My Dying Day’ proving to keep up the pace. ‘All Is Not Lost’ is more laid back than anything so far, it’s bordering on a pop/rock/country ballad that should be a staple on Radio 2. (There’s bugger all-wrong with R2 people!). ‘The Bang Of A Drum’ is a song to really get the blood pumping and one definitely for the live set. Quite often bands but their weaker stuff at the back, probably because a lot of people haven’t got the patience of sitting down and listening to an album in its entirety nowadays. ‘Queen Of hearts’ strongly ignores this trend and it’s a might fine way to finish off an album. It’s a quieter and acoustic way to bow out, and its like Bon Jovi (only when they were great).
Many UK bands have deserved major success over the years and it just hasn’t quite worked out for them Whether The King Lot can buck this trend and make a name for themselves in this current climate remains to be seen, But they certainly have some songs that place their head above the parapet and deserve a much bigger audience
If I could rewrite my fave albums from 2015, this would firmly be placed in the Top 10. Sorry it took me so long to catch onto The King Lot bandwagon fellas!
Score 85/100
Tracklisting
As They Burn
One Of These Days
Addicted
Telegram
Ghost Of You
Lets Get Together
Until My Dying Day
All Is Not Lost
The Bang Of A Drum
Queen Of hearts