As it’s the weekend, Day 3 returns to a rammed Live Club. First to benefit from this are Crazy Lixx, who are more in the Motley Crue school of rock than melodic rock, and their sleaze/glam rock style definitely kicks a few of the previous days hangover into touch. WTF, ‘Whiskey Tango Foxtrot’ definitely has its polish due to the twin guitar attack of Dawson and Liam. Frontman Danny Rexon leads the line well, and takes his persona from some pretty decent rock gods. The latter half of their set was pretty damn good – ‘Riot Avenue’, ‘Blame It On Love’, ‘21 Till I Die’ and finishing with the excellent ‘Heroes Are Forever’, which at this rate should see them fulfill their prediction (7.5/10)

I was looking forward to seeing this Norwegian rock goddess. I was hooked from the debut album, and Issa rocked up looking resplendent in high heeled thigh length boots which at one point nearly became her downfall. Opening with Boulevard’s ‘Dream On’, Issa was in the benefit of a pretty shit hot band, and backing vocals again come from DelVecchio. ‘Invincible’ is sandwiched between two of her finest songs ‘Angels Crying’, and ‘I’m Alive’, after which she discussed the weather ‘’Im so pale, I’m from Norway’’. Well it’s not Norway Issa, it’s the fact you live in bloody Yorkshire that gives you that pale complexion. Finishing with Aviators ‘Can’t Stop’, Issa definitely made a mark with the crowd (7.5/10) 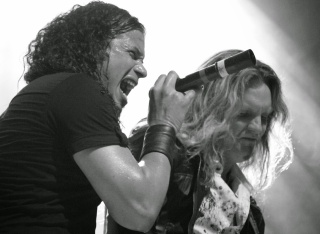 Jeff Scott Soto is a quite different proposition in doing his own thing. Only this time the order of the day is the colour black. He has surrounded himself by a set of fairly young guns from South America and beyond. The question is, when you’ve been doing the rounds as long as JSS has, what on earth do you pick to choose, as the choice is immense – Takara, Malmsteen, Talisman, Soul Sirkus and his own solo stuff. For ‘Take You Down’, guitarist Jorge Salan knows how to rip the place up, and again, like other bands over the course of this festival, the harmonies are sublime. ‘21st Century’ allows Jeff to show off his funky side, and ‘Believe In Me’ and ‘Holding On’ are performed live for the first time in almost 10 years. When it comes to Jeff’s extended medley the crowd go absolutely nuts – Talisman is the order of day and he throws the kitchen sink, cabinets, taps and plug at us all. Seal’s ‘Crazy’, and Madonna’s ‘Frozen’ (not the Disney one) get an outing. After some discussion with the management to try to lengthen his set, he asks to play the riff of what he wants to sing. That song is Steel Dragons ‘Stand Up And Shout’, and for the first time today the Live Club was almost levelled. The bar has well and truly been raised for today (8.5/10)

If one bloke gives of the vibe ‘rock star’, then that bloke is John Waite. He’s the only one to make an effort and go all Barney Stinson on us and ‘suit up’ for the occasion. One thing is for certain, he still possesses an excellent voice. Guitarist Keri Kelli’s hair has the look of a panda/badger hybrid. Waite brings out his big guns playing songs from his exemplary past – The Babys ‘Back On My Feet Again’, ‘Every Time I Think Of You’ and ‘Head First’, to the Bad English crowd pleasers, ‘When I See You Smile’ (singing a capella for most), and ‘Best Of What I Got’. ‘Missing You’ was a must, and then finishing with Led Zepellin’s ‘Whole Lotta Love’, quite unexpected, but  a bloody good version. Page and Jones need look no further should they want a replacement for Plant, I shit you not. My only misgiving was that there was something Missing (no pun intended), probably a keyboardist to fill in the gaps. Good, but I expected a little more (7/10)

Despite my final comment concerning JSS, if today’s event was a party, prior to Danger Danger it’s the musical equivalent of pass the parcel.  Suddenly it becomes the equivalent of 2000 revellers turning up at your mum’s house for the party of a lifetime. Once they come onto the stage Ted Poley proclaims “We’re Danger Danger and we are going to kick your asses”. If ever a statement was true to its word, this was it. A few people had reservations about today’s performance based on a previous UK performance where a lot of pissing around was evident. Today, it’s a very different and downright focused Danger Danger. One thing that immediately strikes me is how good Ted Poleys voice is. It took me by surprise I admit, and DD hit the ground sprinting with ‘Rock America’. Even tech difficulties with Steve West didnt halt the flow “we have technical difficulties, whereas in the old days we had testicle difficulties” proclaims Poley. If ever a band was going to make the most of a limited set then Danger Danger were the AOR equivalent of a typhoon/hurricane combined. For ‘I Still Think About You’, Poley decided to walk thru the bar area, to the end, and decided to walk his way from the back of the hall, through the crowd. He got about 50 feet covered before being mobbed and had to make a hasty retreat. DD saved the very best until last for superb renditions of ‘Monkey Business’ and ‘Naughty Naughty’. Quite a few bands proclaim to be part bands, but after this performance no one quite does it like Danger Danger (9.5/10). Firefest revellers watch out! P.S. Think I may have been subjected to some tomfoolery as looking back on my notes I apparently like boys cocks! Rob Evans, you’re a twat!!

I was a bit worried about how Winger would respond to the Danger Danger whirlwind that landed on Trezzo ‘sullAdda and kicked everyone’s asses. Straight from the off, Kip Winger proves he has one of best vocal ranges over the whole festival, and is in fine fettle indeed. Whilst not the original line up. Winger have 75% originals covered in Reb Beach and Rod Morgenstein. Completing the line up is the versatile ‘other bloke’ that no one seemed to get his name as Roth was on duties with Starship. Opening with the new ‘Midnight Driver Of A Love Machine’, its a well-received new track that fits in well with the ‘classic’ Winger repertoire. Winger have certainly been the whipping boys for a number of years, but they are definitely a musicians band as even Ted Poley was spotted at the side of the stage singing his arse off for the likes of ‘Pull Me Under’ and ‘Blind Revolution Mad’. Even Winger can make their own fans despair a little. Technically superb, they can even border onto progressive at times, but when they do this on the last couple of songs, their intention comes over as being pretentious, rather than down to ‘look at us, aint we cool’. Musically and vocally Winger were very good, but having the slot after Danger Danger and before Night Ranger, they had to pull out all the stops, just to compete, and on this part they just lacked that little extra that was needed (7/10)

Night Ranger were here to show EVERYONE over the course of the last three days how to put on a show. They have probably been doing this gig every weekend for the last 10 years, and it’s a polished performance as the door knockers in Mr.Sheens test laboratory. Intro playing is AC/DCs ‘You Shook Me All Night Long’, an unusual choice for a melodic rock band, but a welcome warmer upperer. Jack Blades has to be one of the most energetic front men I have ever witnessed, and certainly belies his years. Basically its 3/5 of the original line up, with Blades, Keagy and Gillis, with both Eric Levy and especially Joel Hoekstra fitting in nicely. Night Ranger offer up one hell of a set list  – ‘A Touch Of Madness’, ‘Sentimental Street’, ‘Secret Of My Success’, intertwined with a couple of Damn Yankee songs :- ‘Comin Of Age’ and ‘High Enough’. I like both songs (a lot) but I don’t see the need for NR in playing them, especially when they have such an extensive and excellent back catalogue. That said, NRs harmonies are sublime, especially when you have Blades and Keagy in tow. Definitely, you won’t be seeing Gillis on many guitar award, but you have to see him to believe him, as he truly is one of the finest rock guitarists of his generation, wringing every note and emotion out of his guitar. ‘Dont Tell me You Love Me’ spills out into Deep Purple’s ‘Highway Star’ as a close, before coming back for the obligatory Keagy classic ‘Sister Christian’, and they prove that (you can still) ‘Rock In America’, Milan or any other country.

Night Ranger are a well-oiled machine. I would love to see then at their own gig where they could maybe play a little longer, but as a first time Night Ranger gigee they go right into my top bands I’ve ever witnessed in my 35yrs of gigging. All this from a band who should be past it, but are nowhere near it. Fan-fucking-tastic! (10/10)

Congratulations to all the guys at Frontiers for putting on one of the best festivals ever! Bring it on next year