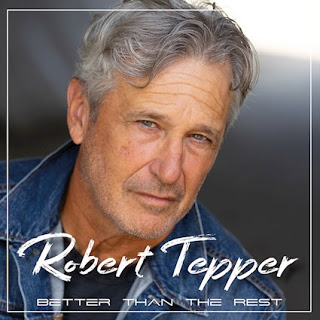 Robert Tepper – ‘Better Than The Rest’

Singer/songwriter Robert Tepper was born in Bayonne, New Jersey. Tepper began his career in the music industry as a staff songwriter in New York City. While in New York, Robert formed a partnership with fellow singer/songwriter Benny Mardones. The duo struck pay dirt with the hit ballad “Into the Night,” which not only peaked at #11 on the Top 40 radio pop charts in September, 1980, but also earned the pair a Grammy Award nomination. Tepper went on to collaborate again with Mardones on the latter’s 1981 follow-up album “Too Much To Lose.”

Robert signed up with the Scotti Brothers record label in 1985 and moved to Los Angeles, California. Tepper scored another hit with the rousing tune “No Easy Way Out,” which was featured on the soundtrack to Rocky IV (1985) and peaked at #22 on Billboard’s Hot 100 pop radio chart in 1986. Robert released his debut album “No Easy Way Out” that same year. Despite being prominently featured on the soundtrack to the critically reviled Sylvester Stallone action vehicle Cobra(1986), Tepper’s dynamic song “Angel of the City” failed to crack the top 40 radio charts while the single “Don’t Walk Away” only made it to #85. Robert released his second album “Modern Madness” in 1988 and was a member of the classic hard-rock group Iron Butterfly for several years. His third album “No Rest for the Wounded Heart” came out in 1996. Tepper released his fourth album “New Life Story” in 2012.

Like many people my first experience with Robert Tepper was with the song ‘No Easy Way Out’ and I was hooked but for some unknown reason his solo albums have never done as well as I believe they should so hearing he had a new album coming I was excited to give this a listen.

‘Better Than The Rest’ is a finely crafted collection of songs and Robert’s voice is as good now as it was 30+ years ago. Listening to this album certainly brought back memories of ripped jean, leather jackets and Poodle Perms. While these songs are finely crafted it doesn’t mean that they’re amazing and that is the problem that I picked up on the first listen, although the album is well written and produced I found it painfully boring, there are moments when I thought here we go this is the high quality track that I’ve been waiting for but sadly it just never quite reaches the potential. It took 6 songs for me to even tap my feet, usually when I listen to an album on repeat it doesn’t take me long to pick up lyrics and start singing along but it just didn’t happen with this release.

For such a talented musician and songwriter Robert Teppers albums always seem to receive a warm reception then under perform. I was hoping ‘Better Than The Rest’ would break that chain but in my opinion which may be unpopular, it won’t. A lot of bands from the 80’s/90’s although performing the kind of material that made them successful back then have made enough tweaks to their sound to appear fresh, Robert Tepper hasn’t done this. I wanted to love this album but not matter how many times I listened to it I simply couldn’t. I’m giving ‘Better Than The Rest’ a meagre 6/10 and to be honest it’s only the quality of the production that stopped me marking this lower.