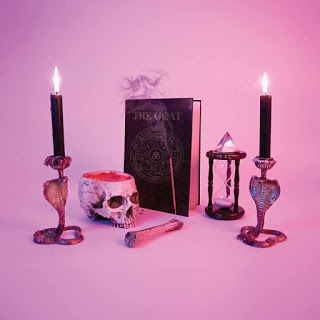 If you’re like me, and are completely unaware of who Puppy are, then stand in line for one the best new(ish) bands you haven’t heard of….yet! I sware that if you’re a fan of anything from the likes of Black Sabbath (heavy riffage to be heard a-plenty here folks), to Van Halen to Teenage Fanclub/ Coheed & Cambria (pop rock sensibilities), then you are in for a huge effin’ treat.
The threesome are made up of – Jock Norton (Vocals and guitar), Billy Howard Price (Drums), and Will Michael (bass), and their debut album, The Goat dropped 25thJan, and its bloody fab!
From the album cover, you would be forgiven for thinking that you were about to hear some black/death/doom metal, but the reality is far from it. Yes, there are riffs that are some of the best of this side of Tony Iommi’s moustache, and so much melody, that you would think that you were listening to J-Pop, but the combination comes together to great effect. In fact it looks like it is the learners edition of ‘Everything You Need To About Alister Crowley’. With songs like ‘Bathe In Blood’, And So I Burn’, ‘Entombed’, I’I Feel An Evil’, ‘Entombed’ and ‘Demons’, your spider senses would certainly be tingling in an Occult leaning, but its not all true….the titles lead you toward death metal, but the reality is that Puppy reference a lot of your inner demons.
‘Black Hole’ comes menacing straight out of the blocks, and then its not quite the vocals you expect to hear, almost the opposite, but once you’re settled into this path then its all good, very good. The bridge also comes out of left field, its like they are following some magic 8-ball formula, that works! The riff to ‘Vengeance’ takes you right back to the 80s and bands like Anthrax, but with Coheed’s  pop vocals. ‘Poor Me’ sees Norton channel his inner Papa Emeritus/Cardinal Copia as it has the same deep and dark riff, but with a melody that could pierce the Top Ten chart easily.
‘And So I Burn’ plonks us back in 80s territory, with a riff that Ratt would be proud of. The song is carried along through Michaels pulsating bass and Prices’ drum beat. ‘Entombed’ kicks off with a nu-metal riff, before a hint of Alice In Chains style vocals and 70s guitar solo. ‘World Stands Still’ cranks it up to Mark Tremonti levels of riffing, with Prices drum beat pummeling you just because they can. ‘Bathe In Blood’ is riff upon riff chipping away at your sanity, with a prog tendancy. Its where genres collide and form a new one! ‘Nightwalker’ is the first song to give you a bit of a break. Its like a Kurt Cobain ballad. ‘I Feel An Evil’ sees Michael take over vocals and the result is more akin to a whole metal package, like Foo Fighters on steroids. All too soon and its onto the final track, ‘Demons’ an 80s chugging riff that Priest would be proud to have written
Think of all these bands that hit the charts early 90s, – Wheatus, Sum 41, Deftones, etc. Its like that, but with Puppy there is one key difference,  its if the above bands had Tony Iommi (Norton) riffing the place up
The combination of ear melting riffs and polar opposite pop commercial vocals shouldn’t work as well as it does. There a lot going on here that deserves repeat listens as its not as simple as Sabbath meets Ghost. I suspect that it could be divisive. However, I loved it.
Their liner notes state that they would like to thank ‘all 12 of their fans’. After this album I am certain they can but at least four zeros after the 12.
This dog has definitely got ‘BITE’ and one hellova ‘BARK’ . When they tour very soon, don’t expect them to have their bellies tickled at the merch stand.
Score – 8.5/10
Tracklisting
Black Hole
Vengeance
Poor Me
Just Like You
And So I Burn
Entombed
World Stands Still
Bathe In Blood
Nightwalker
I Feel An Evil
Handlebars
Demons