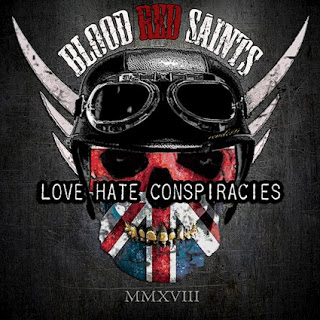 Blood Red Saints – Love Hate Conspiracies
Do ya believe in fate? Nah, me neither! But I write this up on the second anniversary of Blood Red Saint’s debut album launch. Spooky!
Now then, this may put the cat amongst the pigeons, but BRS are no longer a nice pink and fluffy melodic rock/AOR band. With ‘Love Hate Conspiracies’, it brings a new direction for them, and I have to say….. It’s a bloody good one! In fact it’s not good, it’s fantastic!!
The new album also sees two new Saints baptised to join original members Pete Godfrey, Rob Naylor (bass) and Lee Revill (guitars). Neil Hibbs (formerly of Arkhams Razor, Shy) joins to add a harder edge with crunching guitars for a tougher approach for both live and studio work. Andy Chemney (drums) was an obvious choice having worked with Rob in their previous band ‘Angels Or Kings’.
Rob Naylor takes up the story. “I’ve known Andy nearly all my life, he was the guy I wanted for our band and we are so pleased to have finally got our man”
So, what can we expect from ‘Love Hate Conspiracies?’ Lee Revill …”it’s musically in a heavier direction than Speedway. We still wanted big melodic choruses but we wanted to toughen them up a bit too. We’ve got such a strong set of songs here and we are all excited to finally let people hear them, on the album and also live, these songs are gonna kick ass”
This collection of songs certainly does live up to its Ronseal guarantee….the songs kick ass. Opening song ‘Another Freak’ it is more US than UK as its style sits somewhere between Shinedown and Red Sun Rising  with the verse modeling itself on Nickleback’s’ ‘Burn It To The Ground’, and is heavier and metal(er) than anything they did on their debut. There’s still a lot of melody to be found here and its the type of song that would get major play on US rock radio, especially if the guys were from Manchester NH, than Manchester, UK.

‘Live & Die’ also follows suit with its heavy groove, and they have made the correct decision in going for the jugular, as Pete Godfrey has never sounded better. ‘Wake Up’ sounds just like a companion piece to ‘Dangerous’ from the debut. ‘Exit Wounds’ is all about the harmonies, and had it been 1985, the lads would be onto a sure-fire winner. ‘Something In Your Kiss’ is a song that has seen BRS take snippets from the 80s and Def Leppard in particular and uses them to great effect. In fact, it’s more Leppard than Leppard! ‘Love Hate Conspiracies’ is wonderfully executed with its multi-layered harmonies and newsreel action in the mid section. ‘Arms Wide Open’ you’ll be please to know, isn’t a Creed cover, it’s a full on ballad. It’s a good one, don’t get me wrong, but I’d have loved an album full of rockers, but as a live song I can really see it ‘Kickin’ Up Dust’ (see what I did there? No? Oh well!).
‘It Is Over’ sees one of our Antipodean singers take the mic (and co-wrote), and that’s one Paul Laine. Both Paul and Pete’s vocals sit very well together for the chorus and side by side for a duet of sorts, and is definitely one of the bigger songs on LHC. The guitar and keyboard riff is as infectious as it is to music, as Ebola is to humans. ‘Sometimes’ is a song that is the closest they get to anything on their debut, and ‘Rise Again’ is a bit darker and moodier before resetting the dial back to ‘melodic’ for the chorus. We are quickly to the sharp end for the final track ‘Turn On The Night’ a song written by Steve Brown of Trixter and Tokyo Motor Fist. It’s probably the most positive and ‘happy’ song on the whole album. A definite summertime listen with the top down anthem and the closest they come to a Bon Jovi sound.
If it were me, I would grab the audience at next years HRH by the balls and play this in its entirety. Its that good, and worthy.
I’ve noticed there’s a bit of Pete talking on this album, I don’t know if he is subliminally putting himself out there as a voice over artiste?
Final verdict, it’s a little firecracker of an album. So, dig out your denims, leg warmers, Union Jack tee shirt, layered wig and rock out to one of the best rock albums of 2018. Harder IS better.
Score 90/100
Tracklisting –
Another Freak
Live & Die
Wake Up
Exit Wounds
Something In Your Kiss
Love Hate Conspiracies
Arms Wide Open
It Is Over
Sometimes
Rise Again
Turn On The Night
Blood Red Saints –
Pete Godfrey – Vocals
Rob Naylor – Bass
Lee Revill – Guitars
Neil Hibbs – Guitars
Andy Chemney – Drums
The album is released Jan 26 2018  through AOR Heaven and there is also an album launch at Manchester Academy 3, Friday 9thFeb 2018. Tickets £8 ADV/£10 OTD
https://www.facebook.com/bloodredsaints/