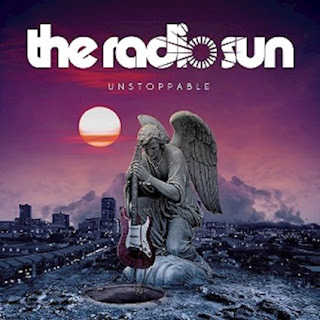 Now I couldn’t normally give a Castlemaine XXXX if a band is melodic rock, melodic hard rock, AOR or West Coast. OK, so I reallydraw the line at West Coast. But normally, I don’t care what label a band is tagged with, only if
a.     its good enough, and
b.     makes me feel good.
c.      all the above
Thankfully, the previous three albums by my favourite antipodean band, The Radio Sun, have ticked all the boxes for me so far. This fourth album, ‘Unstoppable’ which is aptly named by the way, feels like bands from the 70s, whereby they seemed to release an album every 6-9 months. Its probably because I only got in on the game with their second release, so what with this, it seems like three albums in very quick succession!

Either Messers Janevski, Old, Wong, and Annese don’t like their wives much, or they really like churning out albums quicker than a Koala can pop out ‘Joeys’. If you need to look, I’ll save you time….its 35 days! It’s a slight exaggeration, but what I’m saying is that The Radio Sun are bloody prolific.
Now you would think that ‘prolific’, and ‘quality output’ may not go together as quality takes time to produce. Well, nobody told these guys….
If you know The Radio Sun, then you will know what to expect from them. If you don’t, then pull up a chair and I’ll fill you in….’Heaven On Earth’ sees TRS lay out their stall with their pop-rock treats. In the days of the ‘traditional’ single, Unstoppable would be chock full if ‘em, none more so than the infectious ‘Only You’. In fact it’s the musical equivalent of the Liverpool Hospital of infectious diseases! ‘You’ve Got The Tough’ displays The Radio Sun’s knack of an ear for great harmonies. Mix it up with Janevski’s understated solos adding the right level of melody and riffage and it’s a perfect match. There’s no swiping left here folks.
‘Tonight’s The Night’ has a harder edge than usual, and is a firm favourite for me with its 80s groove. ‘Surrender Your Heart’ draws on further 80s influences like US pop/rock princes Cheap Trick. Roxus’ Andy Shanahan adds even more class to the excellent ‘Dreams Should Last Forever’ with they guys certainly building this one up to the max. The tempo remains firmly in the ‘up’ position for ‘Set The Night On Fire’, and the anthemic title track, ‘Unstoppable’. ‘Whenever You Want’ is one of those songs that The Radio Sun do ever so well, catchy as hell, instantly memorized, and a fun, upbeat song. Other bands work their balls off to write a song like this, yet TRS seem to do it regularly and consistently.
There’s a good reason why TRS are over in the UK again for their 3rd HRH appearance in a row. If you need me to tell ya, then you’re in the wrong place. It’s not because they are cheap!
Existing fans of The Radio Sun will crack a fat one listening to ‘Unstoppable’. Potential fans thinking of dipping a toe into the best Aussie band this side of Bundoora, give it a burl.
A bonzer album from a ripper band.
The Radio Sun head to Japan in November and back to Europe in March 2018 with shows at HRH AOR amongst others
Score 90/100
Tracklisting –
Heaven On Earth
Only You
You’ve Got The Touch
Tonight’s The Night
Surrender Your heart
Dreams Should Last Forever
Set The Night On Fire
Why Must I
Unstoppable
Whenever You Want
You’re Everything To Me
The Radio Sun –
Jason Old – Vocals
Stevie Janevski – Guitars & Vox
Gilbert Annese – Drums & Vox
Anthony Wong – Bass & Vox
Produced by The Radio Sun
Mixed By Paul Laine
Released 20th Oct.
Pre-order now and you can still get a signed copy. Just visit the lads FB page for details……
https://www.facebook.com/pg/TheRadioSun