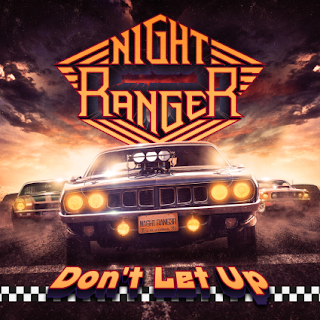 Night Ranger – Don’t Let Up
Night Ranger are probably one of the most underrated bands from the 80s. The fact that they never really stopped despite the likes of grunge getting away is pure testament to their undeniable craft and quality. They are one of the finest bands I have ever seen live in my lifetime of gigging these past 35 years. In fact the stats for Night Ranger are mightily impressive – 17 million albums sold, over 300 live shows, over a billion in radio audience and still shit loads of people have no idea as to who they are.
Night Ranger are old hands at this, in fact they can put albums out in their sleep. One thing is for certain, and that is that Night Rangers guarantee is to pump out energetic, positive and catchy melodies for fun. Not only do they have the twin guitars of  Brad Gillis and Keri Kelli, but also the twin vocals of Jack Blades and Kelly Keagy as witnessed none better than in the opener ‘Somehow Someway’.
“Looking all I’m leaving behind, they say that I’m the Jedi of fools’’ is an inspired lyric, and I didn’t think much of  ‘Running Out Of Time’ after the first listen, bit after repeated spins, its got under my skin. ‘Day and Night’ is a powerful track but is let down by its chorus. It’s the opposite with the title track, the verse is boring and comes to life with the chorus. ‘(Won’t Be Your) Fool Again’ is a standard blues fare.  ‘Say What You Want’ is more like the opener and a typical Night Ranger song – high tempo, rock. When they do this its ever so simple, and ever so easy to listen to. ‘We Can Work It Out’ and ‘Nothing Left Of yesterday’ as songs on the lighter side of Night Rangers repertoire.
One thing that rock bands just love doin’ is to sing about their woman…..and have her name just as the title track – Angie, Rosanna, April, Roxanne as prime examples. Night Ranger have done one with ‘Jamie’ Out of the latter part of the album, this one is the most associated with their trademark groove.
Don’t Let Up sits in well with the last few Night Ranger albums, but they aint no 80s album. Not even ‘Man In Motion’. I admire that fact greatly that they still want to put out albums. Im more in admiration that they still wanna rock out and tour. If I were to see them again would I want half a set of songs from 2007 onwards – probably not.  I’d want to hear the stuff from when they were kings and ruled the airways. But that’s just me.
75/100
Night Ranger –
Jack Blades – bass, vocals
Kelly Keagy – drums, vocals
Brad Gillis – lead & rhythm guitars
Eric Levy – keyboards
Keri Kelli – lead & rhythm guitars
Tracklisting
Somehow Someway
Running Out Of Time
Truth
Day And Night
Don’t Let Up
(Won’t Be Your) Fool Again
Say What You Want
We Can Work It Out
Comfort Me
Jamie
Nothing Left Of Yesterday