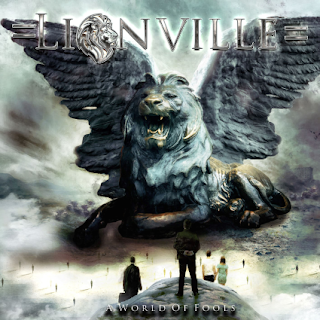 Lionville – A World Of Fools
Born as a high profile project dedicated to pure AOR with a touch of Westcoast and melodic rock, Lionville draw inspiration from acts like Toto, Richard Marx, Giant, Bad English, Survivor, and Boulevard. The project was started by Stefano Lionetti, a songwriter, singer, and guitarist based in Genova, Italy and his brother Alessandro. After years of playing the local club circuit of Genova, Stefano started LIONVILLE with the encouragement and help of Pierpaolo “Zorro” Monti (Shining Line) and Alessandro Del Vecchio (Edge Of Forever, Eden’s Curse, Hardline). With the involvement of singer Lars Säfsund (Work Of Art), LIONVILLE quickly began to take shape
Its surprising how fast time passes. It’s been five years since Lionville II was released. In a time where peoples musical tastes change quickly, and more and more bands come into the scene, five years is a lifetime. Good things come to those who wait……
There’s been a bit of tinkering in the lineup since ‘II’, but thankfully the sound behind Lionville remains constant with Stefano Lionetti and Lars Såfsund the two key components. Bringing up the rest of Lionville is Michele Cusato – Guitars, Giulio Dagnino – Bass, and Martino Malacrida – Drums
If I had to describe Lionville’s sound, it would be in two simple words….’silky smooth’.  Most of that is down to Såfsund’s vocals. Since he came on the scene with Work Of Art, his vocals prove to be one of the finest in this genre. If anything, the quality of songs are what makes or breaks a band, and this is the finest Lionville album yet. Its 80s AOR with a Westcoast vibe that will have fans of Toto and the like in raptures. Its aor-candy for the 21st Century!
‘A World Of Fools’ is consistently good, with a few songs that rise above the parapet into excellent. Their stall is well and truly set out with the pacey and riff heavy opener ‘I Will Wait’. ‘Show Me The Love’ is European pop/rock AOR at its best. ‘Bring Me Back Our Love’ ticks all the melodic rock boxes in abundance, polished sound, hugely melodic chorus, and strong riffage! ‘One More Night’ is one song that is to be played at maximum volume just to show off the infectious chorus and rip roaring solo. ‘Heaven Is Right Here’ follows the same musical path. There’s a lot of positivity in this album, very uplifting any a joy to listen to, as ‘All I Want’ proves. With a song like ‘Livin’ On The Edge’ I expected a rip-snorter of a track, whereas it’s the complete opposite. Its not bad, but its not the best on the album by a long shot. ‘Our Good Goodbye’ is so Toto-esque, I half expect to hear WIllaims/Lukather and Paich to be playing on it! ‘Paradise’ is another of those anthemic arena songs that Lionville seem able to write without and issue. Its like shelling peas for them.
I’ve enjoyed the Lionville journey so far. Their debut came out of the blue for me initially, and ‘II’ was also a joy. I think with ‘A World Of Fools’ they have surpassed themselves.  Existing fans…it’s a no-brainer. If you have not listened before, what are you waiting for. Its silky smooth, highly polished Westcoast AOR. Its exactly the type of band Toto should take on the road with them.
February is proving to be a strong month for Frontiers…
Score 85/100
Tracklisting
I Will Wait
Show Me The Love
Bring Back Our Love
Heaven Is Right Here
A World Of Fools
One More Night
All I Want
Livin’ On The Edge
Our Good Goodbye
Paradise
Image Of Your Soul
Lionville are
Stefano Lionetti – Guitars, Vocals, Keyboards
Lars Såfsund – Lead & Backing Vocals
Michele Cusato – Guitars
Giulio Dagnino – Bass
Martino Malacrida – Drums