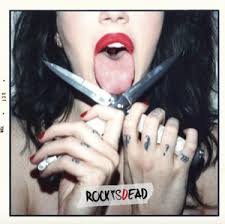 DOROTHY – Rockisdead
First of all, my keyboard isn’t buggered, DOROTHY is meant to be spelt in CAPS! I found these guys completely my accident on YouTube and I’m absolutely staggered by the quality of their music.
They are stated as saying in an interview, ‘’Basically, we want to make songs that we think Beavis and Butthead would like’’. I’m exactly not sold on that, as I’m one of the minority who hated them with a vengeance, but if you’re a fan of ‘proper, old school, classic rock music’ then you can look no further that this.
DOROTHY’s music has been heard by millions and featured on such TV shows as ‘Orange Is The new Black’ and ‘Pretty Little Liars’. The band is Dorothy Martin (vocals), Zac Morris (drums, not Saved By The Bell), DJ Black (guitars) and Gregg Cash (bass).
My love of this band comes with a caveat – If you’re NOT a fan of reverb and distortion then keep well away, as its used in abundance on every song. I cant work out of Dorothy Martin has….
a.     natural reverb in her voice
b.     she is singing through a loud hailer
c.      it was recorded in someone’s bog (for those not in the UK, bog = toilet)
d.     it has shitloads of intended reverb and distortion
Basically, if the reverb in her voice is say for example at a level ‘100’ as a measuring tool, then bass is ‘110’, drums ‘120’ and guitar is somewhere above ‘150’!!! On every bleedin’ song.
This is something that could easily get up your tits, but it all adds to the experience, as the quality of the songs  (for me, anyway) completely bypass any ‘dist-verb’ sensory overload. 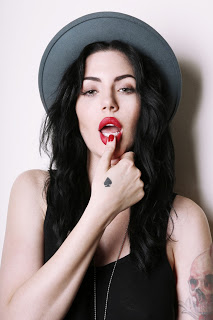 ‘Kiss It’ immediately gets all limbs kicked into gear, and the use of her ‘ahhh-ahhhhs’ takes the melody higher. I have to say that her voice is one of the few that has had me excited in quite some time. ‘Dark Nights’ has this pulsating rhythm thread that weaves its way through every song on the album (except the last). ‘Raise Hell’ is a song that screams Southern US, down and dirty, sweaty, sexy, and rhythmic; the kind of song that would feature on True Blood or Banshee. ‘Wicked Ones’ is my personal favourite on ‘Rockisdead’. Again the use of ‘eee-hooos’ is a simple thing, but oh so effective. ‘Gun In My Hand’ comes across as hymn, a powerful preach of a song, and Martins voice mixed with the harp, and acoustic slide combine beautifully. ‘Medicine’ man is simple bewitching, like a voodoo ceremony that you would see on the Discovery Channel. ‘Woman’ had a classic rock vibe, with Zac Morris twatting holy hell out of his kit, and DJ pushing them to the limit. Only ‘Whiskey Fever’ is the song that falls behind DOROTHY’s high standards, it’s a little repetitive. Its good, but as everything that comes before is so wonderful, ‘good’ is a noticeable drop! ‘After Midnight’ and ‘Missile’ bring the quality back up to 11,  and they finish on a ballad (of sorts) with ‘Shelter’ a bluesy number that I could easily hear Jay Buchannan adding his voice to. For me, to hear Rival Sons similarities is a big complement. The song revolves around Martin’s raspy, sultry and emotional voice and is a great finish.
Lots of female fronted bands in the 80s and 90s go deals on the gorgeousness of their singer. Dorothy Martin is a beautiful woman, but her voice is the key here as it’s just bloody fantastic 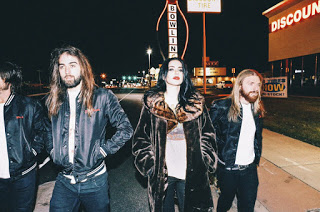 It is probably one of the best 35 mins set to vinyl / CD I’ve come across in ages. The songs are mostly sort, snappy and straight to the point. An album doesn’t have to be 75mins to be good!
The album is great. Take my work for it. Also check out YouTube for some live performances that’ll really set your pulse racing. It’s pushing Rival Sons for my album of the year so far and that is saying something….my hope is that they make it big, really big. “Rockisdead’ is a bit of a ‘one-trick’, but that ‘trick’ is one of the best you’ll hear or see. There’s now’t wrong with a huge slab of blues/ heavy / swamp / stadium rock. I can’t wait to see where they go next.
Check out their version of Jay Z (Zed in the UK) and Kanye West’s version of  ‘Church In The Wild’ below. DOROTHY’s is a far superior version. Now THAT’S how you do a cover version)
Score 95/100
Tracklisting –
Kiss It
Dark Nights
Raise Hell
Wicked Ones
Gun In My Hand
Medicine Man
Woman
Whiskey Fever
After Midnight
Missile
Shelter
DOROTHY
Dorothy Martin – Vocals
Zac Morris – Drums
DJ Black  – Guitars
Gregg Cash – Bass