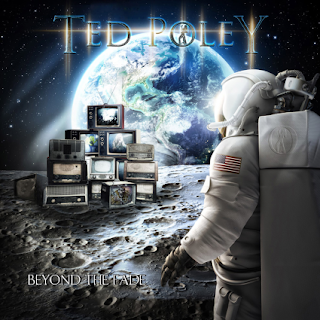 April 2016 saw Frontiers put out The Defiants, and excellent album by Danger Danger members Bruno Ravel, Rob Marchello, and sometime singer Paul Laine. Well, May 2016 sees the turn of Ted Poley. Rock stars have to make a living you know, and one album every seven years (9 if you go off his last solo album) doesn’t cut the mustard. I’m guessing D2 broke a huge fucking mirror and have waited for 7 years of potential bad luck to subside before getting back in the studio(s). Danger Danger were one of my bands of the festival when they played the inaugural Frontiers festival in Milan back in 2014, so it’s a mystery why they haven’t recorded on the back of this. At least if you’re a D2 fan, its bonus time, as you get not one, but two albums from the guys in a matter of a few weeks. I’m also guessing that Serafino has another album due out in June by Andy Timmons and Steve West?!
Hands up as to who is the most prolific writer in rock history? Elton John, Jagger/Richards, McCartney? I doubt it, as I reckon its Alessandro del Vecchio. He is the Frontiers ‘go to’ guy for writing and producing, along with the brothers Martin. I honestly think Ale writes a song before he has a crap every morning, he’s that prolific!
Has Ted come to the part with the attitude ‘Screw It!’ or has he ‘Get His Shit Together’ and about to ‘Rock America’? Gladly it’s the latter, as the Martin Bros / Del Vecchio combination has come up trumps and Ted has delivered an album true to his brand, style and personality!
The album starts with a ‘Bang Bang’, with ‘Let’s Start Something’, ‘Everything We Are’, and ‘Hands Of Love’, with the latter coming straight out of the debut Danger Danger songbook, and it has JLT as a writing credit. James Martin keeps it all in the family for ‘The Perfect Crime’ as Issa pops in for duet, and it proves to be a great choice as they fit each other like a studded leather glove. ‘Starts’ sees Ted up the ante a fair bit and it is one of the best on offer here with its pacey chorus. ‘Higher’ proves to be no less catch and has a chorus that just screams ‘get the top down on the car’. ‘You Won’t See Me Crying’ has some proper fist pumping moments, just dog out your hair brush or ‘air mic’ of your choice and sing along, and is followed by a heart-breaking ballad, the excellent ‘We Are Young’. Its up and down in tempo for the last two song, the bouncy ‘Sirens’ and the wind down of the lengthy, melancholic power ballad ‘Beneath The Stars’ with its cool out solo by Percudani. You just want to hear more!
It aint ‘Danger Danger’ or ‘Screw It,!’ (what is?), but its probably the best Ted Poley solo album and you cannot say fairer than that. Poley basically sings his arse off on ‘BTF’. Whether he needs to record or tour remains to be seen, but Ted Poley is just the guy needed at the likes of HRH AOR or Rockingham.
I have to doff my cap to all concerned here, especially the songwriting and production. I’ll forgive Ted if it takes him another 7 yrs to deliver an album if they all prove to be as good as this one. ‘Beyond The Fade’ is a polished, accomplished and very worthy addition to any AOR fans CD collection.
Score 85/100
Tracklisting –
Lets Start Something
Everything We Are
Hands Of Love
The Perfect Crime
Stars
Higher
Where I Lost You
You Won’t See Me Cryin’
We Are Young
Sirens
Beneath The Stars
Ted Poley – Vocals
Alessandro Del Vecchio – Drums, Keyboards, Backing Vocals, and probably
Mario Percudani – Guitars
Anna Portalupi – Bass