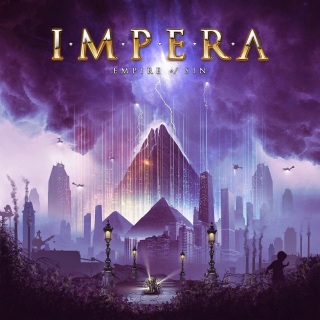 Impera are back!. If anyone out there liked the 2012 album ‘Legacy of Life’ or 2013s ‘Pieces Of Eden’ then hold onto your cowboy hats rock dudes and dudettes as the Jan release of ‘Empire of Sin’ sees the lads take their craft to another level.
The whole band consists of solid musicians who have earned their wings through hard work with an impressive number of world-class stars over the years. Their combined CV reads as a who’s who in today’s rock. In various constellations they have played with Vinnie Vincent and Bruce Kulick from Kiss, Brian Robertson from Thin Lizzy, John Levén from Europe and many more. Guitarist Tommy Denander alone has played with almost everyone. His track record is jaw-dropping, having made solo albums with key members of Toto and performed on albums with Michael Jackson, Paul Stanley, Alice Cooper, Ricky Martin and Celine Dion. He is considered one of the world’s best session players and has contributed his axe work on an unsurpassed 2000+ albums. Yikes!!
Alfonzetti has been a sought-after voice for years with domestic success with Bam Bam Boys, Road To Ruin and Skintrade, as well as international stints with Red White & Blues, Scott Gorham from Thin Lizzy and British band Jagged Edge with whom he shared stages with the likes of Lita Ford, David Lee Roth, Vixen and Dan Reed. J.K. Impera himself can brag about having played with a number of KISS members, Graham Bonnet, John Corabi, to mention a few.
Impera is Latin for ‘ruler’.  Which probably accounts for the make-up being an influenced mix of Ming the Merciless and Darth Vader. Either that or he has a 12” cock! 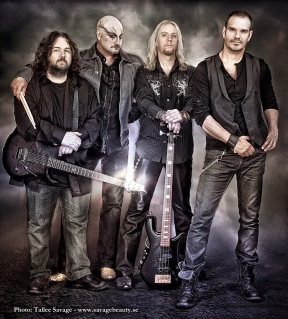 ‘Empire Of Sin’ kicks of with the positively barnstorming riff of ‘The Beast Is Dead’. Couple Alfonzetti’s dulcet tones to this groove and ‘The Beast…’ chugs along at a great pace. ‘Evil (Become A Believer) takes Impera into heavier territory. Considering the pedigree of the band, they have departed from a more melodic stance and gone full throttle for pulsating riffs and heavy rock with a huge H! Don’t Stops riff reminds me of classic Ratt, only Impera have one of rocks best voices in tow. ‘Hole In The Sky’ comes out of the Tony Iommi book of Sabbath riffs and in ‘End Of The World’, Impera go for their album signature tune. ‘Thunder In Your Heart’ isn’t a cover stab at the Farnham classic (some things should stay original). ‘Lights In The Sky’ has a riff that I expect JSS of Steel Dragon to pitch in with ‘Stand Up and Shooooootttttt!!!!!!’
Impera have come on leaps over ‘Legacy..’ and ‘Empire….’ deserves a listen by the rock community. Whilst not a classic, Impera are a truly talented bunch who know how to write and perform songs in the true words that define them…CLASSIC ROCK!
Score 83/100
Impera are…
J.K.Impera – Drums
Matt Alfonzetti – Vocals
Tommy Denander – Guitars
Mats Vassfjord – Bass