Forget the current travelling circus that are gigging under the Thin Lizzy Moniker. I don’t know if this is great legacy to keep passing on to new generations, or a way of generating money for those involved as a pension ready for that great old musicians home, on the back of the great man himself Philip Parris Lynott
I’m a big fan of Lizzy and have witnessed the Thunder & Lightning tour, when they were on fire, the non-Lynott version with Sykes at the helm, and I’ve even witnessed the best tribute band, Limehouse Lizzy, although you could say that the current Lizzy touring band is the best current tribute band. For me there is only one Lizzy and that’s with Lynott at the helm. All the album line-ups had something to offer in their own way, even the Chinatown-era Lizzy
This version up for review is the 2 disc version, but for Lizzy aficionados, there is either the 6 CD (+DVD), or 5 LP version, or buy both! The songs are collated from all of the BBC owned Thin Lizzy recordings. Such was the BBCs propensity to wipe tapes, some of the recordings have been supplied by the general public, and a couple of gems have found their way onto this collection. The CD basically brings together a raft of sessions and live recordings from throughout their whole career
As a 2 disc version, there are some fine moments indeed, with a number of previously unreleased recordings which makes the purchase worthwhile, as its not just another regurgitation of Lizzy numbers.
To be honest it’s a cd of change and their metamorphosis into the Classic Rock act that Thin Lizzy became. There’s some of the early Eric Bell (including a rather nice ‘’poptastic’’ DJ BBC intro) stuff which comes across as being very dated, moving onto the writing force that was Phil Lynott and his command of language and phrasing that became the signature sound of Lizzy from the late 70s onwards
My only gripe is that the 2 disc set lacks any decent stuff from Moore’s tenure (Black Rose), even the golden era of Robertson/Gorham isn’t that well represented here (Fighting/Johnny The Fox/Jailbreak/Bad Reputation). I suspect that you can’t fit such a wealth of this period onto a 2 cd set. Hence why there is the ultimate edition available for purchase. The second cd is the highlight for me as it covers my era, the Thin Lizzy I fell in love with as a spotty teenager. There’s also some very interesting music on the first half of this collection, and it’s great to see the development of Thin Lizzy over a 12 year period
If he was alive today I’m sure that Thin Lizzy would be huge, giving Lynott the mega success he craved (and deserved). This collection is surely the next best thing, reminding us all of what a huge talent, amazing songwriter, and all round genius he was. Essential for any Lizzy fan
As much as I like this 2 disc set, I’m saving my hard earned pennies for the mega edition (£60-65 approx – see below)
85/100 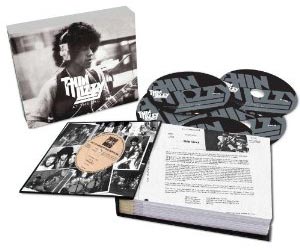