/* Style Definitions */
table.MsoNormalTable
{mso-style-name:”Table Normal”;
mso-tstyle-rowband-size:0;
mso-tstyle-colband-size:0;
mso-style-noshow:yes;
mso-style-priority:99;
mso-style-parent:””;
mso-padding-alt:0cm 5.4pt 0cm 5.4pt;
mso-para-margin-top:0cm;
mso-para-margin-right:0cm;
mso-para-margin-bottom:10.0pt;
mso-para-margin-left:0cm;
line-height:115%;
mso-pagination:widow-orphan;
font-size:11.0pt;
font-family:”Calibri”,”sans-serif”;
mso-ascii-font-family:Calibri;
mso-ascii-theme-font:minor-latin;
mso-hansi-font-family:Calibri;
mso-hansi-theme-font:minor-latin;
mso-bidi-font-family:”Times New Roman”;
mso-bidi-theme-font:minor-bidi;
mso-fareast-language:EN-US;}
I know it’s been a few months since Underwaterouterspace was released, but occasionally it does no harm whatsoever to keep the momentum going/ flame burning/ on a release or band that is worthy of the cause. In Slaves To Gravity, that certainly is the case.
I first came across them in 2008 before their debut album was released, and (it wasn’t me) STG were tipped for bigger and better things. Whilst that hasn’t happened it doesn’t mean that will not be the case. Now in 2011 they have a decent record label behind them in SPV which should enable them to make the grade and give them the much needed promotional push and assistance to get them on some major tours. I caught them late 2010 supporting Alter Bridge, and their performance was brilliant.
Also assisting with the potential for greatness is the acquisition of a heavyweight producer in Bob Marlette (Black Sabbath/Iommi, Marilyn Manson, Airbourne, Shinedown, Filter, Anvil, and many many more you’ve never heard of but I can recommend), and on top of all this he is a talented musician in his own right
With these two major pegs filling the correct holes, STG have everything going for them, but have they benefitted from the decent label/producer combo???? 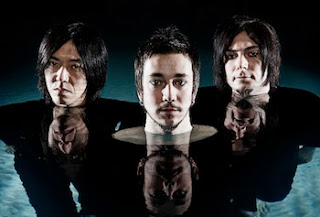 I feel that STG are a bit of a Marmite band, you’ll either think it’s all a bit contrived, taking its lead direct from the grunge movement, or like me, you’ll think they have much more to offer with the big riffs, huge choruses, and all with a hard rock assault on your senses.
There is no doubt whatsoever that STG aren’t influenced by grunge, but this by now way makes them unlistenable in my own eyes. The have taken an influence, particularly Soundgarden, and mixed it up with the guile and energy of the Foo Fighters.
The storming opener ‘Good Advice’ has a huge riff, and great catch chorus, and the sound that emanates from just these three are amazing. ‘ Honesty’ sees STG take its foot of the gas a little, which isn’t difficult, and sees them going more into the Foo Fighter driven mode. Whilst on that subject ‘She’s Got Big Plans’ with its great flow thru to the instantly sing-a-long-able chorus. They knock it up a gear with the mesmerising ‘Misery Pills’. ‘Silence Now’ sees STG kicking off their boots and putting some slippers on, with a more chilled (In their own inimitable style) and more radio friendly mode.
As a bonus they have included a DVD of videos from their debut album, and long with a ‘making of’ and makes for a really decent ‘extra’.
To be totally honest, it’s just one great song after another, and they have certainly upped their game from the debut album. STG are probably the best band you haven’t heard yet!