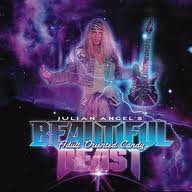 Like Hong Kong Phooey often consulted the Hong Kong Book of Kung Fu, I myself have often been known to dip into my iSpy book of Rock Clichés. None more so than receiving this album to review by the artist known as Julian Angel.  Cue sexy voice over ‘’Not just Julian Angel, this is Julian Angel’s Beautiful Beast – Adult Oriented Candy’’
First, as by perusing the album cover and proving my cliché based theory ….
So far, so good.
Unfortunately from here on in my praise is rarely given. Yes the kid can play as the great Terry Brock once sang, but for me this is where it all goes a bit ‘tits up’. I can imagine him rocking a bar somewhere in downtown LA f or some desperate MILFy trailer trash hanging on to their 80s lifestyle by their fingertips, stabbing at one last chance of being a rock groupie. But this is where Angel’s musical legacy deserves to be left. Angel is obviously so far buried up his own arse that the diamonds on his bandana formed by themselves. Someone obviously forgot to tell him that he’s not the best singer that was put on the planet (or in the bar that he plays in come to think of it).
Opening track ‘Showdown’ starts well enough, but Angel has this ‘strain’ to his voice similar to the sleaze bands of the 80s like Faster Pussycat etc. Al least the harmonies are good. And on it goes…’Do You Want It’ has the hallmarks of a good ‘glam’ metal track that Poison would have been proud to write, but I just can’t get over Angel’s voice. ‘Tokyo Nights’ again has Angel singing in his ‘Oscar The Grouch’ tone. He’s even so self absorbed that the very last track ‘Singer And Guitarist In A Hair Band’ is pretty much self-flagellation for our Mr Angel!
Sure it’s all fine and pleasant enough, but the songs could have been given more of a clout had he just (JUST!) stuck to playing gee-tar, writing the stuff, and producing.  After one listen (one was enough for me) I have it all pegged. If you like your rock to be a bit quirky (not too much, like Steel Panther) with a side order of cheese, and set firmly in 1985 then look no further. But to be totally honest there is much better stuff out there (recently released) that pays more than a passing nod to the 80s and is done with a bit more (Ok a lot more)  style and craft (Lionville/Shining Light/8-IS/Moritz).
In the ‘Thank You’ credits on the CD, he credits people who buy CDs (fair enough) and slags off those who download (also fair enough). But is deluded enough to think that sales of this will get him gold jewellery, fast cars and even faster women, and will invest profits into the creation of a new CD.
Please bear this in mind and buy it at your peril, because there may well be another on its way. Stick to playing the guitar matey for your next album and man up a bit and have the balls to bring in a decent singer, only then will the fast cars, and faster women appear
45/100
Scoring
100 = A Classic – Every Home Must Have One
90-99 = essential
80-89 = very good
70-79 = good
50-69 = average
30-49 = below average
20-29 = shite
10-19 = utter shite
0-9   = burn the f*cker like it never existed