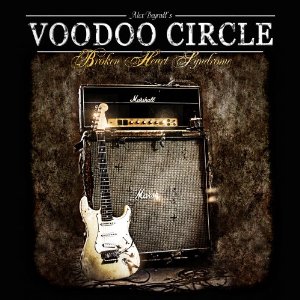 Now I have to apologise to Alex Beyrodt personally for not ever coming across the 2008 self titled debut album. On receipt of this download and my first proper hearing led me to go out and get the debut just to see and hear what I had missed. Damn, the debut was good.
Alex Bayrodt’s Voodoo Circle to quote the band correctly is an absolute slice of classic Rock heaven. You know when you get a whiff of a smell or a taste of food that takes you right back to your childhood? Well, that’s what has happened to me with ‘Broken Heart Syndrome’. Less than a quarter of the way into the album, it transported me right back to my formative teenage years, the golden era for me, bands like Rainbow, Deep Purple (especially Perfect Strangers), and Whitesnake to name but three!
Founded by Beyrodt after many personal sessions with friends such as David Readman (PC 69) and long-term co-musician Mat Sinner (Sinner, Primal Fear). Along for the ride again is ivory tinkler extraordinaire, Jimmy Kresic. The loss of Mel Gaynor has not changed their dynamic of the band, with Markus Kullmann amply filling the drum stool. Producing again is Readman’s stable mate and all round talented bastard Dennis Ward. In following PC69, Khymera and his many, many producing efforts for many a year, I cannot recall Ward really putting a foot wrong. That trend continues as the production is as tight as a nut.
To me its 100% clear that Beyrodts influence is one Richard Hugh ‘Ritchie’ Blackmore. Neo-classical improvisiation, superb song composition, all of which would fit happily in any of the aforementioned bands catalogue, past, present or future
One mega surprise for me was the vocal quality of David Readman. He probably delivers one of the finest vocal performances of his career. I don’t say that lightly. On certain songs he delivers a performance that a certain Mr Coverdale hasn’t this of 25 years or more. Stunning stuff.
‘No Solution Blues’ kicks off with Beyrodts ‘on fire’ riffery, before the ever so catchy bridge and chorus. Just tell me that ‘King of Your Dreams’ does not pay more than a passing resemblance to Purple’s ‘Knocking At Your Back Door’ only this time sung by what sounds like early-Coverdale. Complete with Hammond organ, its a blend of ‘Burn’ and ‘Perfect Strangers’ era. Check out Readman singing the word ‘Wooomaaannnn’ on Devils Daughter. If Carsberg did Rainsnake or Whitebow tribute acts…!
Title track, ‘Broken Heart Syndrome’ brings the rockin’ right back on track, and ‘Blind Man’ harks back to the ballad-like-mid-paced rocker of days gone by. ‘Heal My Pain’ gets the pace back up to 88mph. I don’t want to keep harping on about likeness to Rainbow, but this is my last, with ‘I’m In Heaven’ giving a ‘Street of Dreams’ vibe to proceedings.
Voodoo Circle have the right blend of Beyrodt’s searing guitars combined with delicate laid back blues , sexy vocals, pulsating rhythm and all round greatness. ABVC have produced a set of songs that 21st Century Blackmore (if he wasn’t still in is mandolin induced coma), Coverdale et al would absolutely die for. Whitesnake have a new album out in March, and, if it’s a patch on this, I will gladly show my arse in Burton’s shop window!
I’m assuming that Alex has access to an 80s De Lorean. I am certain, that he went back to 1978, recorded this on 8 track, brought it back to 2008 and had to wait for the technology to catch up so he could convert it to mp3.
You don’t have to be 44 like me to appreciate Voodoo Circle. Fans of 70 and 80’s classic rock era will wet themselves on hearing this album. If you’ve waited for years (like me) for a Rainbow reunion, just forget it and buy this. Classic Rock at its absolute finest.
10/10